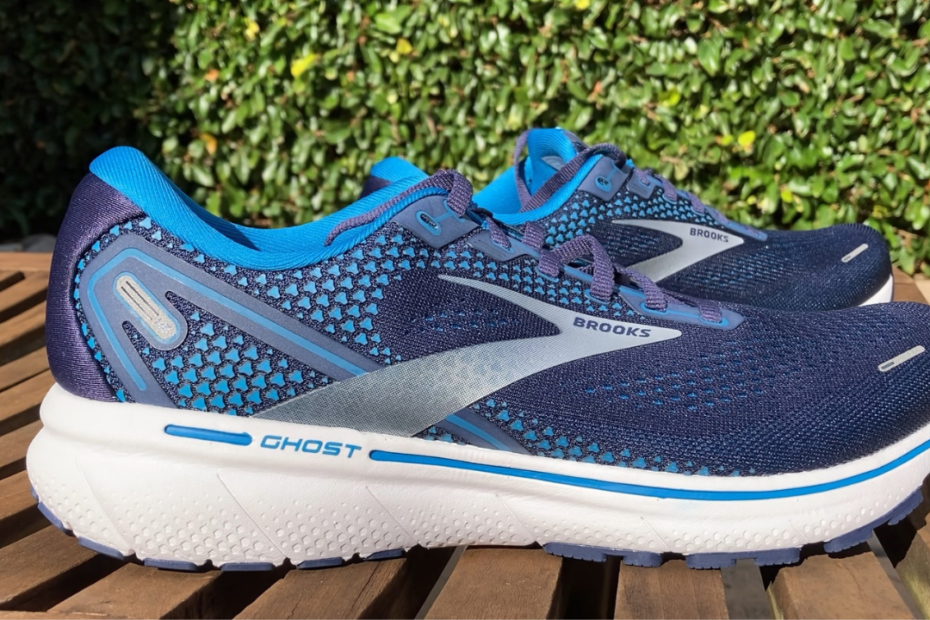 Dylan reviews the new Brooks Ghost 14 running shoe, discussing the updates, pros vs cons, and who the shoe is most suited for. Watch below:

Brooks have a lot going for them at the moment – in the first quarter of this year they were the top selling women’s running footwear brand in the US. And last year were one of the top global sellers in specialty running stores. Which I think is a really good reflection of the product they’ve been putting out.

You may wonder what their best performing shoe was? It was none other than the GHOST. How’s this for a stat, out of all shoes sold in the US in January this year, the GHOST was the 9th top selling shoe (see below). Behind a list of mostly limited edition lifestyle sneakers. A good running shoe is never a popularity contest – but I think in the case of the Ghost, popularity does show credibility.

Alright so the Ghost is positioned as an everyday or daily trainer shoe. Within Brooks’ range it is sandwiched between their most cushioned shoes like the Glycerin and Aurora-BL, and your more lightweight & speed orientated shoes like the Launch and Hyperion elite. Sitting in this daily trainer category makes it a pretty versatile shoe. It is ideal for easy and long runs, but won’t get in most runners way if you need to pick-up the pace. Though if you’re a looking for a shoe that’s a little more speed focused – you may want to look at the Launch. 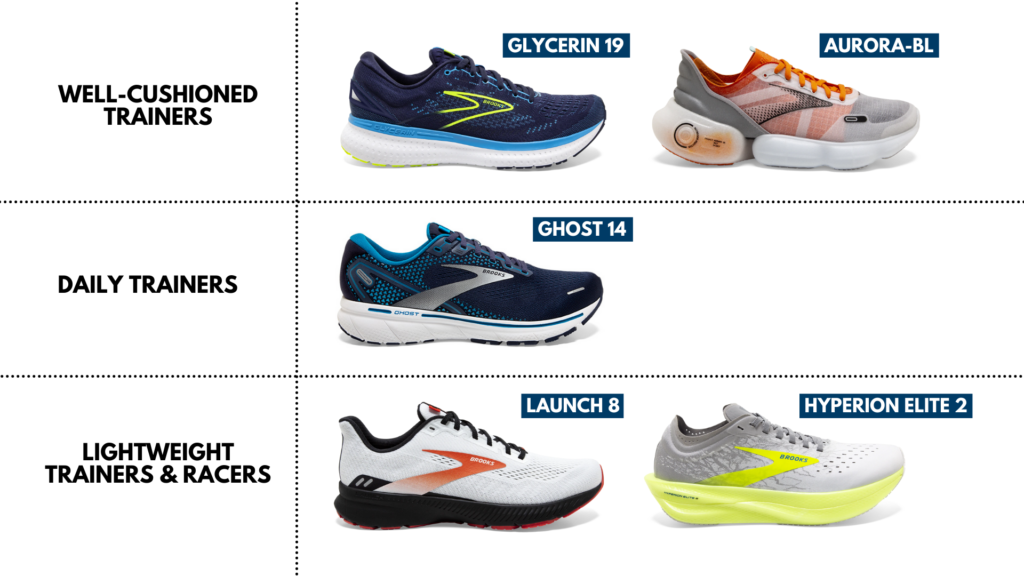 In terms of SPECS: the Ghost has a 32mm heel and 20mm forefoot, it’s one of the few 12mm drop shoe on the market. On foot it’ll weigh in at 281g in a men’s US9 and 255g in a Women’s US7. It’s a neutral shoe, so is built with a standard arch. And in terms of fit, its comparable to last season – being true to size. If you do have a wide foot, the shoe doesn’t offer too much free real estate – luckily most countries offer the ghost in men’s and women’s wide fit option. 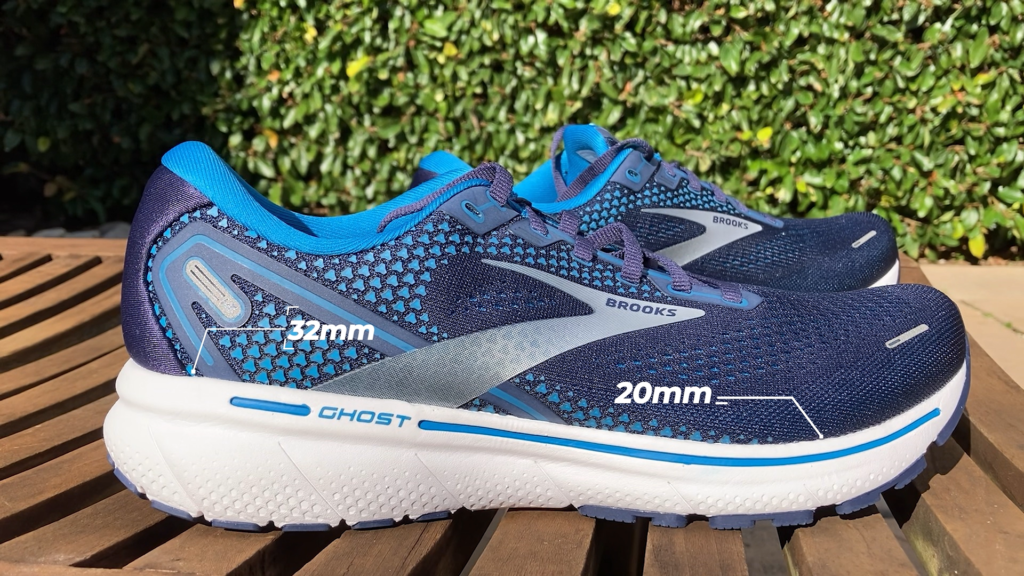 I think the Ghost has gained such a strong following because it’s a simple and reliable shoe. Which truth be told, it still feels pretty similar to the Ghost 11. Brooks don’t reinvent the shoe every season and this keeps runners regularly returning. Few shoes have a better step-in comfort than the Ghost, and despite somewhat of a bulky-traditional feel, it seems to disappear underfoot during training runs. The Ghost is one of those traditional running shoe which you’ll find people wearing with jeans to a barbeque, and rightfully so.

Now let’s talk updates. Brooks haven’t reinvented the wheel on 14, but have made some some minor tweaks that are worth considering. If we flip the 14 over we’ll see an outersole that is very similar to what we had on the 13. It’s a nice durable full length rubber. With some rubber emphasis on the heel to act like a crash pad for your heel strikers. Throughout the outsole they have chiseled off about 1mm of rubber to save some weight, generally this can come at the cost of durability, but the 14 still has plenty of rubber to ensure the shoe is nice a tough. I had to retire my version 12s after 1200km because I had taken some of the life out of the cushioning up at the front of the, but the outsole is still very much in tact.

Moving to the midsole:

Brooks stick with their classic 12mm heel to toe drop on the Ghost. Which would be classified as a high drop. Higher drops tend to help your heel make smooth contact with the shoe. So some forefoot dominant runners may find it to be a bit much, midfoot and especially heel foot strikers may love it, and other runners won’t even notice it.

This season you’ll notice that Brooks will be talking about a foam of theirs called DNA LOFT, which is one of the softer foams that they offer. DNA LOFT has been used segmentally on both their 2 previous versions of the Ghost I have here. On the 12 it was founded just on the heel, and then on the 13 on both the heel and lateral side of the shoe. Now on the new model they’ve used the foam across the whole midsole. Giving the shoe a tad softer feel, but still in line with the Ghost franchise.

A lot of shoes are becoming unnecessarily squishy at the moment. Soft is a selling point in the running world as soft shoes tend to give you great step-in comfort when you initially try the shoe on. But in the long run, softer does not always mean more comfortable. I was initially hesitant about the Ghost becoming softer – but am pleased that the ghost the goldilocks zone, not too soft and not too firm, but just right. So this update won’t upset your Ghost loyalists.

Moving to the upper of the shoe. A lot has stayed the same from previous version. The tongue unchanged still being nicely padded. It’s stitched in and not gusseted or elasticated so easy to get on and off. The ghost has my favourite heel counter of any shoe I’ve worn. It’s comfortable, and I almost want to say luxurious. There is an internal heel counter that cradles the foot, without being overly structured. And is covered by soft padding ensuring no irritation at the achilles insertion. Your heel actually sits quite deep into the shoe which always help ensure your foot has a good lockdown. Inside the shoe there’s a removed sockliner, which will allow orthotics to fit inside the shoe.

Brooks have gone with a lighter more breathable material for the upper which allows in more airflow. It’s still going to give you much as the same lockdown as before. The ghost has also swapped out oval laces for flat laces, which some runners may find annoying, but you can always swap them out if their a nuisance lacing.

So that’s what’s new. Like all my shoe reviews I like to go through 3 pros and 3 cons:

That’s my review, I hope it was useful. Let me know what shoe you’d like to be reviewed next