Nick Symmonds is an American 800m runner with a personal best of 1:42.95. His most accomplished athletic achievements include an IAAF World Championship Silver medal, 5th place at the London Olympic Games, and 6 American national 800m titles (5 of which were won consecutively). Nick, now retired from professional track racing, is co-founder and CEO of the RunGum, and spends his extra time training for the marathon.

During high school, Nick’s personal bests were 1:53 in the 800m, and a modest 4:20 in the 1600m. His collegiate years were spent at Willamette (in Oregon), where he studied Biochemistry. At Willamette, an NCAA Division III school, Symmonds progressed his personal bests to 1:45.83 in the 800m, and 3:40.91 in the 1500m. He also was the Northwest division champion in cross country, with his best 8km cross country time being 24:49.

Tuesday:
AM -Workout. (intervals on and off the track usually totaling 8-10k)
PM – 30 minute lap swim

Following his success at the London Olympic Games, Symmonds published a document detailing his 10 month build-up to the Games. Credit must go to Nick and Rungum for displaying such transparency. Below is Nick Symmonds complete day-by-day build-up to his London 2012 800m final. He finished in 1:42.95 in what would form part of the greatest 800m race of all time. 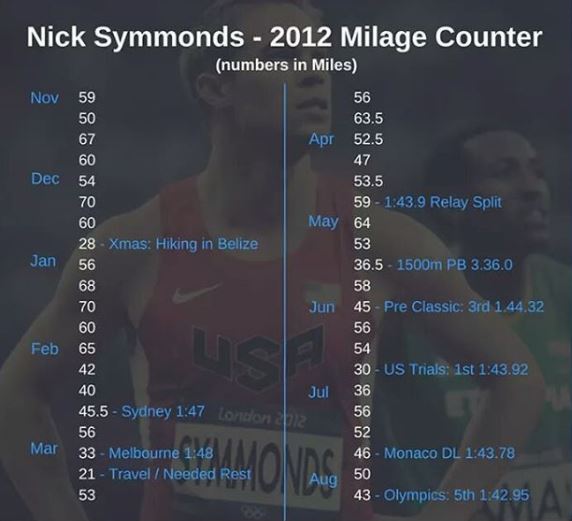 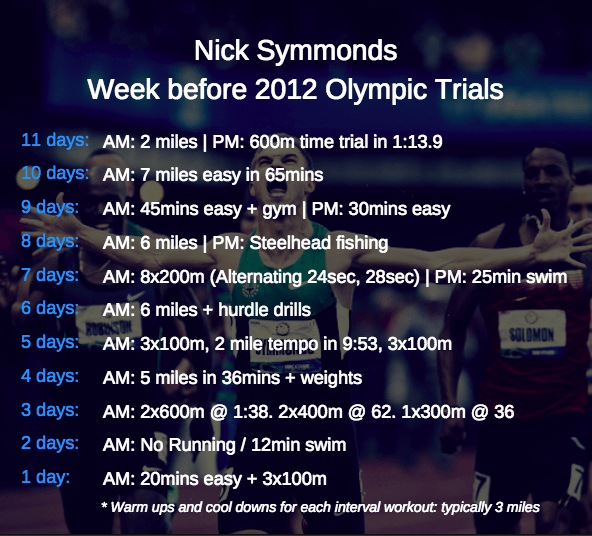