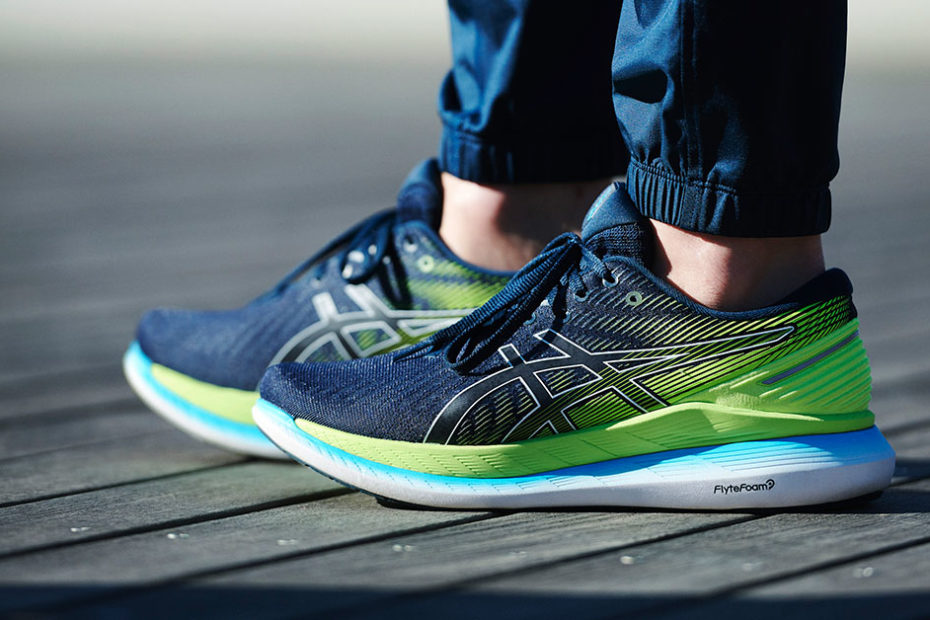 Today I’m reviewing a shoe that I find very interesting – and that is the ASICS GLIDERIDE 2. If you’re not familiar with the GLIDERIDE, it’s a shoe designed with a rigid and curved sole – quite reminiscent of a rocking chair. This might seem like an unlikely combination to have in a running shoe – but there’s in fact a lot of research behind it that might make it particularly attractive to some runners.

So let’s break down the design and talk about what ASICS are trying to achieve with this shoe:

Alright, so the GLIDERIDE is built with what we call a forefoot rocker, which is this stiff and curved sole we see (below). It’s something a brand called MBT popularized in the early 2000s and more recently Hoka One One have adapted it as well, but generally with a more flexible forefoot.

Although the GLIDERIDE has this curved design, the cushioning bed your sits on is fairly flat, so it’s just the bottom region of the sole that is curved.

What this rigid rounded bottom design does is reduce how much your ankle is needed to flex in order to propel you forward. The curvature also allows your foot to use more of it’s own momentum to propel you forward, while the stiffened forefoot reduces movement that occurs at your metatarsal phalangeal joint.

The result of all of this, is that your ankle and all of the muscles and tendon that allow it to move end up performing less work and experience reduced loading forces. So if you’re someone like me who suffers from achilles niggles, the GLIDERIDE could be a really fantastic injury invention to reduce the stretch and loading on your calves and achilles (Sobhani et al 2015). What is worth keeping in mind, is that while we can take load away from an area like our achilles or ankle, some of that load may shift to another region of our body like our knees and hips (Sobhani et al 2016).

So the GLIDERIDE can be a useful tool for some running injuries. But at the end of day it’s not designed solely as an injury intervention tool. This rockered bottom design forces your foot to take the path of least resistance by rolling down the midline of the shoe when you run, giving you a unique underfoot ride. While this isn’t going to be everyone’s cup of tea, some runners will find this shoe to be buttery smooth on foot.

Something I’ve found is that some runners who are very calf dominant during push-off may find that they fight with the GLIDERIDEs as the stiff rocker prevents their calves from working as much and they can’t put down the same amount of force in this shoe. So for this type of runner a rockered styled shoe like the GLIDERIDE can be counter-productive.

When many runners may see a shoe like this, what can scare them is that the shoe doesn’t look like it allows ‘natural movements of the foot’. This is a valid concern. I don’t think this is a shoe you want to put your child in while they’re developing. But research doesn’t suggest that a rockered shoe like this replaces your detrain your foot muscles or counter-productively affect your form (Hannigan, J. J., & Pollard 2019). Your foot is still working, but maybe just a little less.

Now let’s talk about who is the GLIDERIDE is most suited for:

With it’s well-cushioned profile it’s designed for comfort and shock absorbance in mind. I use my GLIDERIDEs primarily to log easy miles and for long runs, which I find to be the shoes sweet-spot. I have done some up-tempo runs in the shoe, and while they can dabble around my marathon and half marathon pace – they are not designed for short and snappy ground contact times as you’re supposed to spend time on the ground rolling off the rocker.

In terms of versatility – the GLIDERIDE is pretty focused in what it can do. If you’re looking for one shoe to accommodate all of your training – from interval runs to long runs, I would consider an ASICS shoe like the GEL-CUMULUS before the GLIDERIDE. But if you have more than one pair of shoes, you could rotate the GLIDERIDEs with a more speed orientated shoe to cover you training.

So far after almost 500km in my pair of GLIDERIDEs, they’ve held up well. And I’m happy with their mileage, it’s built with the all the right things you need to make a high mileage shoe: and that’s a durable midsole, a protected rubber outsole, and a well constructed upper.

Let’s go through what I think are some of the PROs and CONs of the shoe.

So that’s my brief review, if you have any questions feel free to leave them down in the comments below. Until next time.