Renato Canova, now aged 73 (in 2018) has dedicated much of his life to pioneering the training of the world’s most renowned athletes. Under his guidance, his athlete’s in accumulation have achieved 42 Olympic and World Championship medals, and has been involved in over a dozen world records, all in the sport of mid-long distance running.

Canova was once a talented decathlete, with ambitions of representing his country Italy at international competition. While a decathlete, he also assisted coaching 5 up-and-coming Italian athlete’s, who thrived under his lead. Due to the Italian Athletic Federation’s (FIDAL) then rules, Canova could not simultaneously coach national athletes while also competing nationally. Prohibited to fulfill both his decathlon and coaching ambitions, Canova gave up his own athletics pursuit to take-up coaching. Soon afterwards, Canova was hired by FIDAL as an official coach. His first position was the coach of the 400m and 4x400m relay teams.

About a decade later, Renato Canova began coaching the national marathon team, which included coaching Olympic champions, Gelindo Bordin and Stefano Baldini. Canova’s career has also included national team coaching roles for Qatar and China. He has also worked with athlete’s around the world on an individual short and long-term basis. 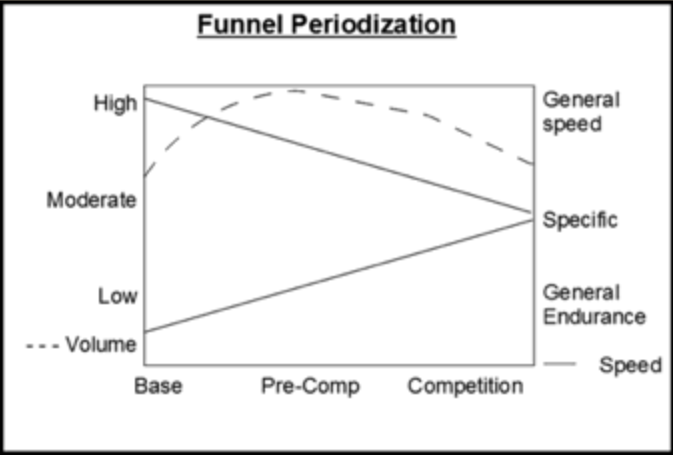 Source: The Science of Running

The premise of Renato’s training is to extend an athlete’s ability to last a given pace, otherwise put, extend the length of time an athlete can run at the specific goal race pace until you reach the full race distance. Thus every event is matter of extension.

To do so, you have to increase the volume of the specific training stress as you approach competition. You thus progress your focus from General -> Special -> Specific training throughout a season. As the figure above indicates, base training utilizes both ends of the training spectrum, high and low intensity stress. In other words, focusing (on the main goal but not in isolation) on general attributes like raw speed and raw endurance and then progressing throughout the season to combined the 2 into specific speed endurance. While doing so, no attribute at any given stage of a training program is ever left out, simply ‘less trained’ due to lower priority and focus.